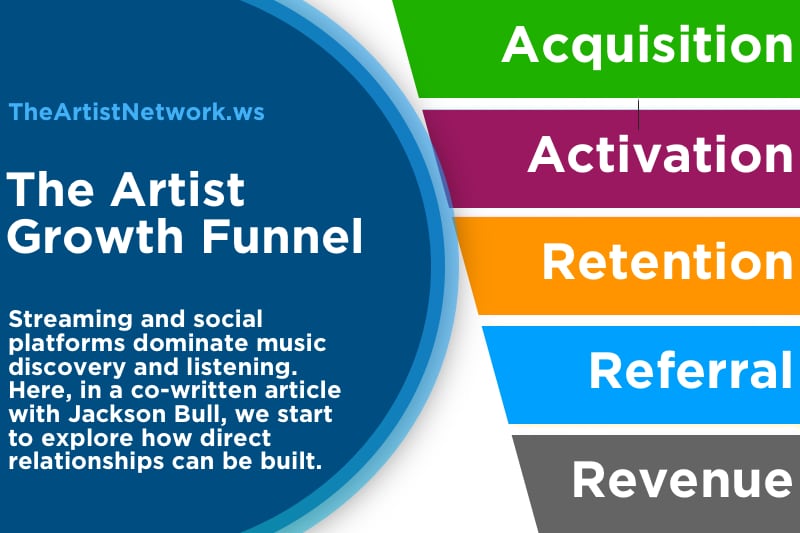 Music Growth Hacking is fundamental to the current music marketing. As the music business becomes a multi-format industry, the growth funnel sits at the heart of concepts such as The Fan Economy and The Artist Economy.

First, please let me make the following point, because it bothers me:

When writing about music, I feel uncomfortable referring to fans as ‘Customers’. Terms like “Acquisition”, used in everyday marketing, seem a crude way to describe the artist-to-fan relationship. For instance, when I discover an artist I like, then follow them on Spotify and perhaps join their mailing list, I hate to think I’m ‘acquired’ by them.

However, when describing growth funnel techniques, it’s difficult to avoid marketing terminology to describe the tools and processes. So, I’d ask that for this article, let’s both agree the terms suck, but for the sake of describing growth hacking, let’s put our unease to one side?

For this article I teamed up with data analyst, Jackson Bull. He’s based in the US and together we describe how social media, plays and artist growth interlink. I know this is not a revelation, but we want to get ‘under the hood’ and provide analysis and practical actions for an artists and their network to put in place.

What Is Growth Hacking?

Growth Hacking is the process of moving fans along a ‘Growth Funnel’.

The first step is, be heard.

As we all know, getting heard is a battle in itself. This is the role of marketing, getting on Spotify playlists, creating a buzz and promotions. I’ve written articles covering these subjects so won’t dwell too much here.

I’ll explore the benefits, although most people know that it’s generally a good thing for a fan to do.

The growth funnel concept is to encourage listeners to become Followers. This is an activation.

Having a lot of Followers and Subscribers is welcomed. However, it’s not the same as having a direct relationship. Unfortunately platforms such as Spotify, Facebook, Instagram, TikTok etc make it difficult to build these direct relationships. There are some justified reasons for this. We’ll be exploring those, plus techniques to get personal details.

The most powerful form of marketing for music is word of mouth. No matter how large your marketing budget, it pales in comparison to one friend saying to another, “Hey, have you checked out this artist? They’re awesome!”

Turning your fans into advocates is key to growing your fanbase organically.

Music, artists and fans currently inhabit a complex mix of social media and DSP’s. These platforms assist discovery, likes and follows. However, they make it difficult to build a commercial relationship, i.e. direct from artist to fan. There are a variety of reasons for this:

Several huge players dominate the music eco-system. Using broad definitions, these can be summarised below.

Let’s look at the common traits:

These problems are exacerbated at scale. For artists with thousands or millions of Followers, it’s difficult (and costly) to send targeted, relevant messages.

I can’t deny social media platforms and the DSP’s have made it extraordinarily easy to discover and share music. Personally, as a music fan, I love Spotify. I’ve been a subscriber since 2009. I listen to it pretty much every day.

However, as someone who works with artists, it’s frustrating. I can see artists with millions of plays but with virtually no way to build a direct relationship with their audience.

Spotify introduced a couple of features – live listings and merchandise – but use third party suppliers.

In fact, the platforms have done such a good job of making it easy to upload music and video, there is a generation of artists who think websites and mailing lists are, in a way, “old fashioned”. It’s not surprising the likes of Facebook do what they can to perpetuate this, since it benefits their advertising revenue if artists push their fanbase to use the Facebook platform.

The focus of the Growth Funnel is to move casual listeners of an artist towards being fans with a direct relationship.

Since the platforms do not make this easy, we employ Growth Hacking techniques to move fans along the growth funnel.

This is a similar concept to Click Funnels that are well documented & understood by companies working within direct marketing. Advertising and landing pages are used to maximise conversion rates and work out the most efficient ‘cost of acquisition’.

The Fan Journey In Growth Funnels

The most common ways to draw fans into the funnel are:

Not every platform allow these. For instance, Spotify won’t allow marketing messages to be placed on photos. However, they allow text in the bio.

To understand growth hacking, it’s probably best to ask yourself, what do you do when you hear a track you like on Spotify?

Years ago I would have made a trip to the record store and bought the artist’s album. Now, I make a decision about which playlist their song belongs on and whether to Follow them.

My initial engagement with an artist typically consists of reading their Bio. If they’re a ‘Current’ artist then I’m more likely to Follow to stay updated with new material.

Ask yourself, what do you do?

Perhaps you’ll click on a link to the artist Facebook page? Perhaps you’ll do a search for them on Wikipedia. Or, if really intrigued, visit their official website?

In other words, our initial engagement is often small, tentative and non-committal.

And, it’s precisely because these initial steps are so small, it’s important to make them, first as easy as possible and second, maximise every opportunity.

Despite the fact the first thing I do after discovering an artist is read the Bio it strikes me how few artists pay it attention, beyond copy and paste their press bio or think they can create mysticism by being minimal.

Imagine, in the ‘old days’, an artist review in the NME that simply said “Hi, thanks for reading”. Would that be enough to get you interested?

The gig listings are just as bad. Pre-COVID I would often look at the Spotify concert listings to see if any of the bands I Follow were playing near me. Occasionally I’d see one playing in a venue not far from me. But what then?

For one thing, I had to find someone else who would go with me. Look, I don’t mind going to gigs on my own, but I much prefer making a night of it – drinks, see friends, food.

But also, I find the way bands treat their gig listing on Spotify is very remote and detached. Rarely a mention in the Bio. No incentives to join their mailing list with an offer.

Given the perilous state of artist’s current finances I can’t understand why they don’t take this opportunity to move fans through the growth funnel and towards a direct relationship.

The Artist Economy means, building stronger relationships with fans. It recognises that artists are central to the relationship but fans are at different stages in their journey. Understanding the growth funnel is the key to building direct relationships.

The following section is written by Jackson Bull of Bull Analytics. Jackson is a music data analyst. We wanted to collaborate on this article since a lot of our work crosses over.

In my last article, we examined the data behind some of the top trending artists on Tiktok. Within that analysis, we discovered just how important it is for an artist to engage with their fans.

In the case of Olivia Rodrigo, having a robust fanbase (which was bigger than 75% of other artists in the sample) before a big release can have a huge impact on your streaming success.

But where exactly can you find your audience?

The music industry today is an overly convoluted marketplace with lots of redundancy; choosing the option best for you can be overwhelming and risky.

Afterall, there are only so many hours in a day to spend online; so the trick is to find the path that’ll gain the most exposure with the least amount of detours. So the decision ultimately comes down to which platform people within your community are using.

This article focuses on the growth funnel, as explained by my co-author Neil Cartwright of The Artist Network, and how some social channels lead to more growth than others.

Specifically, I will be analyzing data for artists across three big channels to find out which ones are most correlated with Spotify follower growth.

These three channels are Twitter, Instagram, and Tiktok. The sample of observations include artists who had previously been added to Alternative VIBES, an independently curated playlist on Spotify. VIBE Lifestyle’s playlist has 117,000 followers who are interested in alternative, emo, pop-oriented, rock.

Before we move on to the analysis, it’s important to take a moment to describe the dataset.

Checkout my Github page for a detailed documentation of variable names and descriptions.

Whenever an artist lands on a playlist, a bump in their streams should be expected. Imagine: Seemingly overnight, a completely different group of people see your name on the playlist, never having heard of you the day before.

The true sign of success, however, is an artist converting those additional listeners to followers who remain by them even after being removed from the playlist. So by subtracting the number of followers 7 days before the playlist from the number 7 days after the removal date, we end up with our dependent variable: Net Follower Gain/Loss(Spotify).

We’ll use its values to measure what kind of an effect our independent variables may have on it.

Our research of each platform includes a quantitative analysis of two continuous variables: the number of social media followers 7-days before each artist’s playlist add date and the net gain of Spotify followers.

We’ll then use Pearson’s Correlation Coefficient to measure the relationship between the two. If you’re not familiar with this test, PCC is based on a scale from -1 to 1; the latter is positive correlation and the former negative correlation.

Secondly, we will illustrate what portion of the sample has an official presence on the platform at hand.

In my next post, I will dive deeper into this playlist selection to find out why some artists who are on Tiktok didn’t gain as many fans as other artists who have the same social presence. Are certain subgenres not as popular? Does release frequency have an impact on growth? Or does engagement play a role? 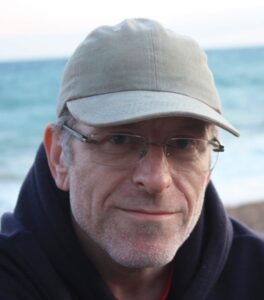 Over a long career in music I’ve worked in almost every aspect of the business. Major label (Sony Music), indie distributors, management, booking agents and publishers. This has enabled me to build a wealth of experience and insight. Through The Artist Network my aim is to share this knowledge with musicians and people who want to work in music. Read more in the About section.